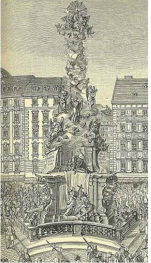 Like Venice, Italy, Vienna, Austria, has always been vulnerable to outbreaks of plague because of its geography and its maritime history. Vienna, Austria, is located on the Danube River, and it has always been a major trading crossroads between east and west.   Vienna’s crossroads location has made it vulnerable to plague epidemics since the first wave of plague swept across Europe in the 14th century.  The Great Plague of Vienna struck the city in 1679, when it was the imperial residence of the Austrian Habsburg rulers.  The 1679 plague epidemic killed more than 76,000 people and the plague returned sporadically throughout the early 1680s.

What is called the “Great Plague of Vienna,” was really a minor part of a major outbreak across Germany, Austria, Bohemia, and adjoining regions. For many years plague had been rampaging over Western Europe, spread by travelers on the trade routes. Rats were the plague carriers up and down the trade routes, especially the Silk Road, and they settled into population centers like Vienna and continued to spread the plague.

Historians believe that the Great Plague of London, occurring in 1665-1666 originated in the Netherlands in the 1650s.  This outbreak of the plague killed around 100,000 people and was the first major epidemic in a series that struck Western Europe.

The city of Vienna was walled until the 19th century, and compact and crowded. Early records show that no public sewers or drainage systems existed. Up until the 16th century the people of Vienna drew their water from courtyard wells, until 1553 when water piping was installed. These improvements didn’t spare Vienna from several plague outbreaks.

Viennese usually piled their garbage into huge mountains in the streets. Plague carrying rats were as plentiful as garbage in Vienna.  Warehouses in Vienna that stored trade goods like clothing, carpets, and grain for months at a time and rats heavily infested these goods. People living outside of Vienna considered conditions inside the city so unhealthy that they plague was often called the “Viennese death.”

The Great Plague of Vienna and Its Descendants

In the early months of 1678, plague struck the Leopoldstadt district of Vienna, which then lay outside of the city proper. Authorities downplayed the plague outbreak and tried to hide its presence. In July, 1679, the plague finally breached the city wall and plague roamed freely over Vienna. Historians today are not certain how many people died in this plague outbreak. Contemporary reports estimate 70,000 to 120,000 deaths, but coroner’s reports list only about 8,000 fatalities.

During the 1679 epidemic, the Brotherhood of the Holy Trinity, a religious order in Vienna, established special hospitals for children and adults. They offered basic nursing care which was a substantial improvement over other medical and public health benefits in Vienna. Doctors treated patients with emetics, bloodletting and by applying evil smelling ointments to their sores.

Patients who died were loaded on carts, driven to the outer edges of Vienna, and put in large open pits for burning. The bodies were allowed to lay exposed to the open air for several days until the pits were nearly full.  This allowed the rat population to remain constantly infected and in turn, to constantly infect people.

To commemorate Vienna surviving the Great Plague, the Viennese built a monument known as the Pestsaule, one of the better known and prominent pieces of sculpture in Vienna. The Pestsaule is German for plague column and it is located on Graben, a street in the inner city of Vienna.

Emperor Leopold I fled Vienna during the 1679 plague epidemic. He vowed to erect a memorial column if the plague would end. Sculptor Johann Fruhwirth created a wooden model showing the Holy Trinity on a Corinthian column and nine sculpted angels for the Nine Choirs of Angels.

In 1683, Matthias Rauchmiller was commissioned to do the marble works, but he died in 1686, leaving only a few angel figures. Johann Bernhard Fischer von Erlach contributed one of the several new designs, by creating the sculptures at the base of the column.

Finally, Paul Strudel became project manager and he based his work on the concept of theatre engineer Lodovico Burnacini. Burnacini envisioned a cloud pyramid below the Trinity figure. Burancini envisioned a cloud pyramid with angel sculptures and the kneeling emperor Leopold praying to a sculpture of faith. Sculptors Tobias Kracker and Johann Bendel and other sculptors contributed to the column which was erected in 1693.

The monument symbolizes the transition to the era of High Baroque in Vienna and it influenced the style in the entire Austrian region.

The Legend of Lieber Augustin

In 1680, the preacher Abraham A. Sancta Clara wrote in “Mercks’ Wienn” that the ravenous plague had not passed by a single lane or street in Vienna. He said that for an entire month around Vienna and in Vienna the sights were nothing but dead people being “carried, dragged and buried.”

Ballad singer, bagpipe player and poet Augustin said, “Oh, my lovely Vienna, that is all gone.”

As well as widespread death and despair, the great plague of 1679 produced the legend of Lieber Augustin. According to the legend, Augustin was a popular street musician who got drunk late one night and while walking home fell into a pit filled with bodies of plague victims. He didn’t contract the plague and finally rescuers pulled him from the pit. He attributed his survival to the alcohol. He is remembered in the popular folk song Oh, Du Lieber Augustin.

Every day was a feast,
Now we just have the plague!
Just a great corpse's feast,
That is the rest.

Although Augustin waxed poetic about the plague, his predictions about Vienna’s demise didn’t come true. Vienna has survived into the 21st century as a culturally rich, diverse, cosmopolitan city that attracts residents and visitors from around the world

A Roman Catholic priest administered the last rites of the church through a window of the plague cells to Herr Barisch’s wife and Dr. Mueller. Dr. Mueller was considered a plague authority because he studied it in Bombay and survived the dangers of studying it firsthand.

The Plague Patients are Isolated

The laboratory plague in Vienna took the pneumonic form. There were no boils, but each person who contracted the plague developed a high fever and blood spitting. Medical authorities took extraordinary precautions to prevent an epidemic. The plague patients were placed in isolated buildings and Dr, Pooch, a volunteer physician, and the Sisters of Charity attended them.

A rope closed them in and no one was allowed to cross the rope. Dr. Pooch wrote the prescriptions and fastened them to a window pane and the doctors outside read them and made them up. Then the prescriptions were put on the window ledge and the people inside grabbed them. The Sisters of Charity and their assistants put food on the window ledge and the people inside retrieved it the same way. Nurses used the telephone to report all changes in the condition of the patients.

Everyone who had come into contact with Herr Barisch, especially the hospital attendants, was isolated. Some of them resisted the precautions and others tried to escape, but authorities captured them and locked them up for their own safety. Viennese authorities feared that their precautions had been taken too late. Herr Barisch had been ill for three days before he called the doctor.

During that time he lived with his wife and he visited wine shops,. His wife, who since then developed suspicious symptoms, visited friends, rode in public omnibuses, and came in contact with dozens of people at her husband’s funeral.

The deadly power of the laboratory plague caused great excitement in medical circles. A well known chemist, Professor Hofrotz Luding, made a speech expressing the hope that the doctors of Vienna would prove themselves equal to all emergencies. Most medical men in Vienna believed that the plague would likely spread across the city.

A temporary hospital made up of several detached sheds was hastily built behind the infectious Hospital, One hundred men worked by torch light to complete it as quickly as possible.

The New York Times story concluded that the anti-Semitic newspapers added a painful aspect to the situation. The anti-Semitic newspapers accused the Jewish doctors of bringing the plague to Vienna. "It is feared that this appeal to the worst passions of the mob will lead to plague riots against the Jews if the disease spreads," the New York Times, said.

One of the nurses and Dr. Mueller died, but no one else in Vienna caught the plague.

Cantor, Norman F. In The Wake of the Plague: The Black Death and the World It Made. Harper Perennial, 2002.