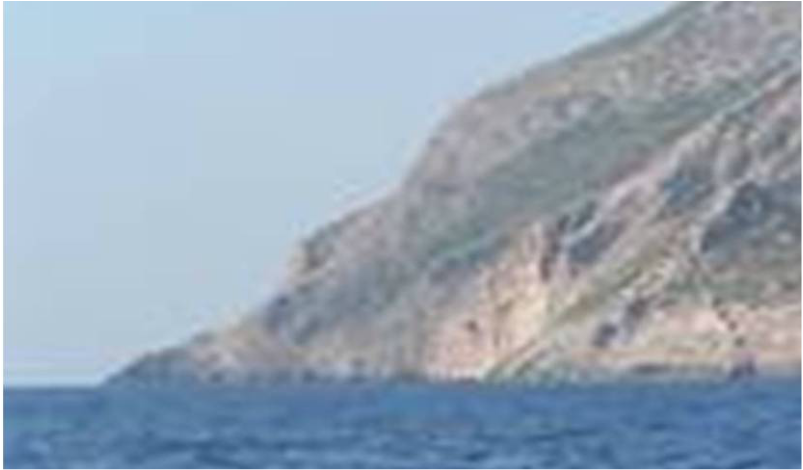 An  English newspaper, the Spectator, published a story about the Hermit of Cape Maleus in August 1901.

A peninsula and cape in the southeast of Greece, Cape Maleus is the south-easternmost cape in continental Europe. The Cape overlooks a strategic sea passage in the eastern Mediterranean that connects the Aegean with the Ionian Islands and western Europe. The seas around Cape Maleus have been traditionally treacherous and difficult to navigate, producing unpredictable weather and powerful storms.

Odysseus encountered the moody and tumultuous weather of Cape Maleus on his way home to Ithaca when he rounded the Cape and was blown off course to the Land of the Lotus Eaters. He endured nearly ten more years of adventures before he found his way home to his wife Penelope. The Hermit of Cape Maleus watched over his wife from his makeshift home on the Cape cliffs overlooking the sea.

An English Sea Captain Sets Sail on His Honeymoon

Around the year 1874, an English sailor happily prepared for his honeymoon. At the age of 26, he had worked his way into an ideal position to be married. With hard work, integrity of character, and firmness of will, he had become the master of a good sized steamship of about 900 tons register.

With his career firmly in place, the English sea captain took the next step.He married his faithful childhood sweetheart who had patiently waited for years for him to become the captain of his own ship. The owners of his ship were so impressed with him that they granted him the privilege of carrying his young bride to sea with him for their honeymoon.

The English sea captain felt like he was navigating through the clouds as he steered his ship down the Thames River in the late autumn of 1875 or 1876. He extolled the wonders of the ship to his new bride and explained the wonders of the world that he would soon reveal to her.

Two of his ship’s officers saw to it that the captain and his beautiful wife enjoyed a fairytale honeymoon. The ship stopped at Cadiz, Spain, and Genoa and Naples, Italy. The ship and crew made a quick visit to Rome from Naples and then steamed to Venice.

At  Venice, the company gave orders for the ship to proceed to Galatz, Romania, to load wheat to take home to England. The new bride was thrilled that she would also see Constantinople and the Danube. She told her new husband that this was the most wonderful wedding trip any bride ever had. The captain guided his honeymoon ship with a heart as light as his bride’s exclamations of delight as she enjoyed the scenery.

Wind and weather favored the honeymoon voyage and no shadows of bad weather or unhappiness darkened the joy of the bride and groom until they neared Cape Maleus one morning before dawn. A Greek steamship headed in the opposite direction of the English honeymoon ship, and rammed into it amidships, cutting it down to the water’s edge. The passengers on the English ship were jolted awake by rushing water and the hiss and roar of erupting steam. Some were scalded in their beds and others were thrown into the sea. All of the passengers except the English sea captain perished in the accident.

The English sea captain clung to a piece of wreckage and the tide washed him ashore under Cape Maleus. Eventually, he came to his senses. Moving as mechanically as a toy soldier, he stood at the water’s edge, searching for his bride. The tide went out and came in again. He lost track of how many times the tide ebbed and flowed, and the sun rose and set.

Still in a daze, the English sea captain looked around. Behind him, a 100 foot cliff jutted upward and on this cliff he saw a plateau of land, perhaps two acres wide. Behind the plateau, the mountain again soared abruptly about 2,000 feet into the clouds.

His strong physique enabled the English sea captain to climb to the plateau where he found a flat rock shelf. Here, he had a sweeping view of the sea and the tossing waves that covered his beloved. His eyes searched the watery meadows for a glimpse of her, just one more glimpse. His eyes desperately searched the sea, but his feet stayed on the rocky plateau.

Some goat herders who were searching for their sure footed flocks that had wandered down the steep sides of the mountain found the English sea captain standing motionless gazing out to sea. The goat herders tried to persuade him to return with them to Ag, their village, but he refused. They told him of AgIrini, the fisherman’s chapel where he could pray for the soul of his beloved. He just stood on the rock, staring out to sea.

The English Sea Captain Becomes the Hermit of Cape Maleus

After surviving some fierce storms on the cliff, one day the English sea captain began gathering scraps of wood and in time he and several peasant helpers had built a house of wood fragments ingeniously fit together. He installed an unglazed window into the wall that overlooked the sea. After the flurry of activity it took to build his house, he once again spent  most of his days gazing out to sea, dreaming of his lost wife.

The peasants living nearby shared their rough provisions with him which he gratefully accepted. They seemed to understand the depth of his sorrow and they continued to bring him food and other provisions.

The Hermit of Cape Maleus lived on his cliff for years, spending his days gazing out to sea at the depths where the bright hope of his life had disappeared. His silhouette in his window daily reminded passersby of constancy, and patient, uncomplaining grief.

The World Learns of the Hermit of Cape Maleus

In the spring of 1879, William Gill of the Constantinople Commission took formal note of the English sea captain. The Treaty of Berlin signed in July 1878, required designating a new border between Asiatic Turkey and Russia. As assistant boundary commissioner, William Gill traveled to Constantinople to establish the new border and he kept a journal of his travels.

One of his journal entries read, "Still the same magnificent weather. I was on deck about 6.30 and found we were steaming past the Grecian coasts. We ran past Cape Matapan at about 9 and Cape Malea about 12. Here a hermit is said to live in a little white house close by the sea shore. We hoisted our ensign for him and sounded the whistle, but he seemed to take no notice and we did not see him although we were within a few hundred yards of the shore."

In Pen and Pencil in Asia Minor, published in 1887, William Cochran wrote that the hut and chapel of the Hermit of Cape Maleus were located 300 feet or so up the face of the rock. He said that the hermit for many years saluted passing vessels by waving a white flag with a black St. George’s Cross embroidered on it.

The Seaside Vigil Ends For The Hermit of Cape Maleus, But His Legend Lives On

One day the seaside vigil of the Hermit of Cape Maleus ended when his lifeless body fell forward on his knees in front of the little unglazed window where he daily searched the horizon. Like Odysseus, literature and years have enhanced and altered his story through years of retelling. The magazine and newspaper accounts of his story have continued the legend of the Hermit of Cape Maleus, just as Homer breathed life into the character and longevity of Odysseus.

The timeless waves wash the Cape Maleus shore, continuing the stories of Odysseus and the Hermit of Cape Maleus.

Ships and Seamanship in the Ancient World. The Johns Hopkins University Press, 1995.