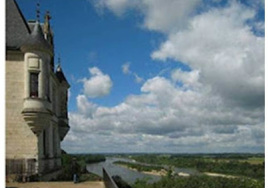 Historians call Jacques LeRay Chaumont the "Father of the American Revolution," and the enabler of the French Revolution. Does his spirit still haunt Chaumont Castle?

The Chateau or Castle Chaumont, between Blois and Amboise, France, is located on a hill overlooking the Loire River with a panoramic view of the Loire Valley. A climb leads to a park of cedar trees that surrounds the castle as well as stables and gardens.

Eudes II, Count of Blois built the castle in the 10th century to protect Blois from attacks from the Count of Anjour, its feudal rivals. The Norman Geiduin inherited the castle and improved it. His great niece Denise de Fougere married Sulpice d'Amboise and the Chateau Chaumont passed into the Amboise family and remained there for 500 years. Louis XI ordered it burned to the ground and from 1465 to 1510, Peter of Amboise, his oldest son Charles I of Amboise and his grandson Charles II rebuilt it.

Catherine de Medici and Diane of Poitiers Live at Chaumont

The apartments at Chaumont contain rooms that Catherine de Medici and Diane of Poitiers once occupied and these rooms still feature tapestries, fine furniture and terra cotta medallions by Nini. In 1560, Catherine de Medici, the widow of Henry II, acquired Castle Chaumont, to use as an instrument of revenge against Diane of Poitiers who had been her husband’s mistress.

Catherine forced Diane to leave her favorite home at Chenonceaux to live at Chaumont. Ruggieri, Catherine’s astrologer, had an office in a room connected to a tower by a stairway and the tower itself was an observatory where Catherine and her Cabbala master questioned the stars and entertained numerous astrologers, including Nostradamus.

In 1594, a tax farmer Largentier, bought the castle and after his arrest for speculation, the chateau and the title of Sueur de Chaumont passed to a family from Lucca. This family owned it until 1667 when family connections passed it to the seigneurs de Ruffignac.

In 1699, the Duc de Beauvilliers bought the Castle Chaumont, modernized some its interior and decorated it expensively enough to house the Duc d’Anjou who was passing through on his way to become king of Spain in 1700. His heirs sold the castle to a Monsieur Bertin who demolished the north wing built by the Amboise family to open the castle towards the river view.

In 1750, Jacques Donatien Le Ray de Chaumont purchased the Chaumont castle for a country home and he built a glassmaking and pottery factor. Benjamin Franklin was never a guest at the Castle Chaumont, but his grandson Temple stayed there.

The United States government considered Jacques Donatien Le Ray de Chaumont to be the French "Father of the American Revolution," but he later opposed the French Revolution. His son, also named Jacques Donatien Le Ray de Chaumont, was born in castle Chaumont. Jacques was born in Nantes in 1726 and he made his fortune in shipping. At age 25, he married Marie Therese Jogues des Ormeaux and purchased the Chateau de Chaumont, located between Blois and Tours, as a country home.

He established a glassmaking and earthenware factory, and in 1772, he signed a contract with renowned Italian sculptor Jean Baptiste Nini to oversee his factories. Nini set up the production of portrait medallions, a sculpture in miniature done in terra cotta for very wealthy people and European Royalty. Jacques and his family held a prominent place in civic affairs and were wealthy and powerful, but they didn’t belong to the hereditary aristocracy.

Jacques dealt with the American colonies, championed the American Revolution, and hated the English. Louis XVI appointed Jacques a member of his council and he became one of the king’s chief advisers in commercial matters. When the King offered him the position of Secretary of Treasury, he refused because he felt that he could better help the American revolutionists as a private citizen instead of a ministry member of a country officially at peace with England.

When the American colonies declared their independence on July 4, 1776, they sent emissaries to France to seek help from King Louis XVI.

Acting as an intermediary between King Louis XVI and the American representatives, Jacques Chaumont swayed the King and the French government in favor of the American side of the Revolution. Benjamin Franklin came of Paris in December 1776 and quickly developed a close friendship with Jacques and his family, living at the Chaumont estate in Passy for several years. Jacques helped him obtain French support of money and armed forces for the American cause.

Besides helping Benjamin Franklin, Jacques also worked with John Adams, Silas, Deane, the Marquis de Lafayette and the Comte de Vergennes to help the American Revolution. Although he was an aristocrat, he believed in the equality of all men and put his money behind his beliefs by providing huge sums to purchase weapons, supplies and clothing for the American armed forces.

The American government asked Jacques to oversee equipment and management of the combined French and American naval fleet. He worked closely with Admiral Charles Hector Estaing, the French Fleet commander. He ordered his shipyards to refit a merchant vessel into a warship. He gave the warship to America, christening it the USS Bonhomme Richard, and earmarking it for Captain John Paul Jones to use.

Jacques' Political Ideas Turn Against Him

When the Treaty of Paris ended the American Revolutionary War in 1783, Jacques Donatien Le Ray de Chaumont commissioned Jean Baptiste Nini to make a portrait medallion of Benjamin Franklin. It is still Franklin’s most famous profile.

The political ideas of liberty and equality of all men that Jacques cherished turned against him. The massive financial aid that he had helped convince King Louis XVI to supply to the Americans led to the bankruptcy of the French government. In 1788, drought caused a severe famine in France and the French Treasury had no money available to subsidize the cost of flour for bread to prevent thousands of people from starving.

In 1789, the French Revolution dramatically reduced Jacques’ own finances and the new French Revolutionary government seized his assets, including his beloved Chateau at Chaumont-sur-Loire.

In 1785, Jacques’s son who had the same name went to America and bought property in Otsego County, New York. In America, he was known as James, and in 1790, he married a girl from New Jersey and became an American citizen.

Without Jacques Donatien Le Ray de Chaumont and the country of France, the United States would have found it difficult if not impossible to win its independence. James and the French government also helped America when the country went to war with the British in 1812.

In 1810, the writer Madame Germaine de Stael, bought the Castle Chaumont after she had been banned from Paris for harshly criticizing Napoleon. For half a year Castle Chaumont served as a literary center and a focus of opposition against Napoleon. After numerous changes of owners, the castle became the property of Vicomte Joseph Walsh, who was responsible for extensive renovations.

The Comte d’Aramon bought the now sadly neglected Castle Chaumont in 1833, and hired architect Jules Potier de la Morandiere of Blois to undertake extensive renovations. D’Aramon installed a museum of medieval arts. In 1875, Marie Charlotte Say, the heiress to the Say sugar fortune bought Chaumont and later that year she married Amedee de Broglie. They restored the stables and chateau and replanted the surrounding park.

The Belle Epoque or "Beautiful Era"

Belle Epoque is French for "Beautiful Era", a period in European social history beginning in the late 19th century and ending with World War I. Coinciding with the French Third Republic, the German Empire, and the American Gilded Age, historians consider the Belle Epoque a golden age for French upper classes. The European major powers were peaceful, new technologies improved people’s lives, no income tax marked their financial horizons, and commercial arts adapted the Renaissance and 18th century styles to modern life. .

Castle Chaumont is a Historic Monument

The Princesse de Broglie, who was the last lady of castle Chaumont-sur-Loire. The Borglies owned Castle Chaumont until 1938, when the French government assumed ownership of the castle. A park surrounds the castle along with over 400 decorative gardens which are open from April through October. Visitors at Chaumont included the Princess of Chimay Caraman, Sarah Bernhardt, composer Francis Poulenc, artist Marcel Proust and poet Jean Cocteau.

The French Ministry has classified Castle Chaumont as a Monument historique since 1840 and currently, the Chateau de Chaumont is a museum that features several exhibitions every year. There is a Garden Festival every year at Castle Chaumont from April to October that allows modern garden designers to display their work in an English style garden against the background of an 10th century castle.

Perhaps Jacques Chaumont himself strolls through the English gardens and remembers his American and English friends.

Hibbert, Christopher, The Days of the French Revolution, Harper Perennial,1999.

Clarke, T. Wood, Emigres in the Wilderness, The Macmillian Company, 1941.

Schama Simon, Citizens: A Chronicle of the French Revolution, Vintage, 1990.