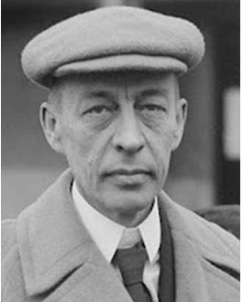 Russian composer-pianist Sergei Rachmaninoff counted the summers between 1932-1939 some of the happiest and productive of his life. These were the summers that he and his wife Natalia, spent at Senar their villa on Lake Lucerne in Switzerland, their first permanent home since leaving Russia.

Sergei created the name Senar by combining the first two letters of his first name and the first name his wife,Natalia, and adding the first letter of their last name. He felt relaxed and happy enough at home at Senar to write two of his major compositions there, Rhapsody on a Theme of Paganini in 1934 and Symphony No. 3 in A Minor, completed in 1936.

Before he built Senar,Rachmaninoff had curtailed his composing considerably, finishing only about six compositions. During these years he toured the United States as a pianist. He said he had to reduce his input because he had to spend most of his time performing to support himself and his family, but the main reason for his lack of production was because he was homesick. Some days he felt like he had left his inspiration back in Russia.

Sergei purchased the plot of land for his estate near Hertenstein on Lake Lucerne in 1932, and designed the villa to remind him of his family’s estate , Ivanovka, in southern Russia where he had lived before the Revolution. His villa was designed in the modern Bauhaus architectural style, a style created by the Bauhaus Institution in Germany. Bauhaus architects rejected “bourgeois” details like cornices, eaves, and decorative details. Bauhaus buildings featured flat roofs, smooth facades, and cubic shapes in colors like white, gray, beige, or black. Floor plans were open and furniture functional. Rachmaninoff arranged for a park and a rose garden to be laid out at Senar. He kept a speedboat moored on Lake Lucerne.

The Rachmaninoffs Are Warm and Inviting

The Rachmaninoffs created a warm and inviting atmosphere inside Senar as well as the outside. Wherever the Rachmaninoff’s lived, they established and ran their home in the Russian tradition. They practiced Russian customs, they hired Russia servants, and they welcomed Russian visitors. Their guest list of notable people included Ivan Bunin and Vladimir Horowitz and his cousin Alexander Siloti. Three of Rachmaninoff’s biographers Sergei Bertensson, Jay Leyda, and Sophia Sedina described an evening at Senar in Sergei Rachmaninoff: A Life Time in Music.

“An evening spent at the Villa Senar is a memory to treasure. Dining, the family sit long at able, in the leisurely Russian fashion, for with them, a meal is not just a means of satisfying hunger, but is regarded as an opportunity for an exchange of ideas in friendly conversation. With many interests and friends in common, conversation is a delight, and if it ultimately drifts into the realms of music, it is not to be wondered at, for, with the great artist, music is not simply a profession, it is his life.”

From Lake Lucerne to Lake Huron

After he built the Villa Senar, Rachmaninoff felt newly rooted and inspired. By most contemporary accounts, he was an intense serious performer, so much so that at one point his friend Igor Stravinsky called him a “six-foot scowl.” But offstage, Rachmaninoff was sociable and warm, with a wide circle of friends. Later in his life, his friends became concerned about his homesickness and inner sadness, so the joy and relaxation of Villa Senar affected his inner and creative life.

Music critics describe Rachmaninoff’s compositions in terms of lush harmonies and lyrical and often passionate melodies. He wrote Rhapsody on a Theme from Paganini at Senar from July 3 to August 18, 1934. The music evokes images of blue summer skies melting into bluer Lake Lucerne, mountains overlooking the lake, and of Sergei Rachmaninoff sitting and writing the notes of his song.

The Rhapsody provides a seamless and timeless transition from Lake Lucerne in Switzerland to Lake Huron in the movie “Somewhere in Time” when Richard Collier first sees Elise McKenna in person walking along the shores of Lake Huron with Rhapsody playing in the background. According to his biographer, after Rachmaninoff finished writing Rhapsody, he said, “This is one for my agent.”

In late April 1935, Rachmaninoff arrived at Villa Senar with the project of writing a new symphony in mind. Contented with his new home and in good spirits, he eagerly went to work. On May 15, he told Sofiya Satin that he had been working and in the following weeks he seriously worked on his composition which would become his Symphony No. 3 in A Minor.

Then, a three week stay at Baden-Baden in July and a two week vacation in August put him behind. Five days before he left Senar at the end of his summer holiday, Rachmaninoff wrote to Satin confessing, “I have finished two thirds in clean form but the last third of the work in rough. If you take into account the first two thirds took seventy days of intense work, for the last third – thirty five days – there is not enough time. Travels begin and I must get down to playing the piano, so it looks as though my work will be put aside until next year.”

Recitals in Switzerland near the end of the 1935-1936 season allowed Rachmaninoff to visit Senar briefly. He took the symphony score with him when he left and he had it with him in Paris in February 1936 where he had the violin parts scored. After he arrived at Senar on April 16, 1936, for the summer holiday, he finished the last movement. On June 30, 1936, he reported to Satin, “Yesterday morning I finished my work of which you are the first to be informed. It is a symphony…With all my thoughts I thank God that I was able to do it!”

The Rachmaninoffs Settle Permanently in the United States

Music critics say that Symphony No. 3 is a transitional piece for Rachmaninoff because he wrote it in a sparser style and it is more focused emotionally than his earlier works. Senar proved to be another transition for the Rachmaninoffs as well. Sergei and Natalia spent every summer at Senar until their final migration to the United States in 1939. They left Senar for the last time on August 16, 1939, bound for New York.

Sergei wanted to be buried at Senar, but when he died in 1943, World War II was still raging and arrangements couldn’t be made for a burial at Senar, the home he loved as much as Ivanovka. Sergei and Natalia Rachmaninoff are buried in Kensico Cemetery outside of New York City, but there is a monument to Rachmaninoff at Weggis, near Senar. Senar still remains in the Rachmaninoff family.