The French Revolution Had More Phases Than The Moon! 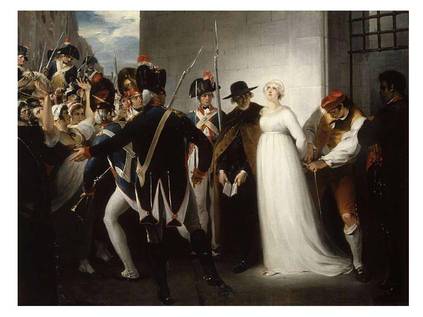 Marie Antoinette on the way to her execution. Wikimedia Commons
The young Lieutenant Napoleon Bonaparte and his country were in the middle of a revolution that events and historians would later divide into stages or phases.

The First Phase of the French Revolution

The first stage of the French Revolution or the National Assembly stage, lasted from June 1789 until September of 1791. It happened spontaneously when the Third Estate- basically the urban and rural middle class- declared their independence with the Oath of the Tennis Court,on June 17, 1789. King Louis XVI finally considered the common people when they overran the Bastille in Paris on July 14, 1789.

The National Assembly issued the Declaration of the Rights of Man and created the Constitution of 1791. It finished its work in September of 1791 and forged a new permanent government, the Legislative Assembly. After it finished creating the Legislative Assembly, the National Assembly peacefully disbanded. The new government was a constitutional monarchy with Louis XVI as king, and the French Revolution was supposed to end at this point since France had a permanent government.

The new constitutional monarchy favored the wealthy middle class or the bourgeoisie who controlled the government as active citizens. Poor people, who were a majority of the population felt left out, and most of them were passive citizens with no voting rights. The government faced serious problems. The King wanted to return to absolutism. Poor people wanted the government to give them more political and economic power.

Other European nations like Austria, Prussia, and England, feared the French government because they felt it spread dangerous ideas like liberty and equality. Many nobles and priests and peasants felt that the Revolution had gone too far. By September 1792, the Legislative Assembly had lost the support of many Frenchmen and collapsed into the Second French Revolution. France needed to create a government that more people would support.

The National Assembly, radical phase began in 1792 and lasted until 1794. The National Convention of 1792 tried to gain support of the poor by giving into their demands. King Louis XVI and his wife Marie Antoinette were executed during this radical phase and the Revolution became violent. The Paris Commune drove the Girondins out of Paris and France slipped into civil war. The government tried to restore order by creating the C.O.P.S. to intimidate citizens during the Reign of Terror.

During the Thermidorian Reaction, the National Convention turned against Robespierre and the COPs. It wrote a revised constitution and revoked many of the freedoms likevoting rights that it had earlier given to the people. The National Convention voluntarily ended after its members created a new permanent government called the Directory.

The Directory was a democracy that the wealthy controlled. They were the only ones who had voting rights. The Directory was intended to be permanent and it used the army to control the people. Napoleon Bonaparte became very powerful because the government relied on his fighting skills to enforce their commands. His military victories aboard captured the imagination of the French people.

The Cosulate formed when Napoleon Bonaparte, Jean Jacques Regis de Cambaceres, and Charles Francois Lebrun realized they had the power to rule by themselves. They overthrew the Directory by force and ruled the country as dictators. France moved further to the right. The Consulate was intended to be permanent and many people supported it because it restored order and helped the country run better. The Napoleonic Code was instituted and its legal and financial reforms were instrumental in creating an effective,efficient system of government.

Napoleon crowned himself emperor and ruled the country alone. France was at its most powerful at this time, with Napoleon's armies taking over much of Europe. Napoleon modernized Europe along Enlightenment principles, but many people also began to resent his power. Nationalism spread to other regions of Europe and the effects of the Continental System damaged the economy. Napoleon experienced crushing defeats in 1813 and 1815. He was removed from power twice and exiled first to the island of Elba in the Mediterranean in 1813 and finally to St. Helena in the South Atlantic in 1815, where he remained until he died on May 5, 1821.