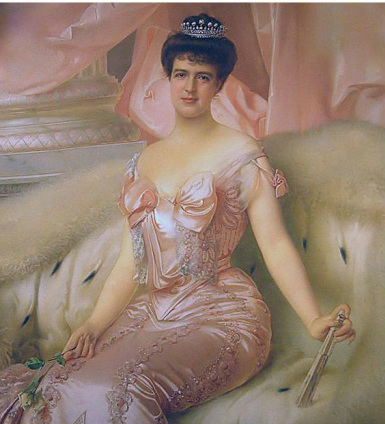 Queen Maria Amelia of Portugal had many tragedies in her life, including exile and the loss of her husband and two children, but she triumphed over them.

For Queen Maria Amelia of Portugal, life often ebbed and flowed as vigorously and relentlessly as the Tagus River winding through Portugal before it emptied into the Atlantic Ocean in Lisbon. Since the Queen had a calm and reflective nature, she may have pondered a popular fado or faith song in Lisbon, Portugal, that said that the Tagus remained young while people grew older. “My hair getting white, the Tagus is always young…”

The Queen had come to Portugal as a young bride, and although life in Portugal away from her beloved France and her family had worked with time to create wrinkles in her skin, her hair had not yet turned white.

Born September 28, 1865, Amelia was the oldest daughter of Prince Philippe, Count of Paris and his wife and cousin Princess Marie Isabelle d’Orleans. She spent many of her formative years at the Chateau d’Eu in Normany and the wind blowing sea spray across the sloping lawns and the sound of the waves slapping against the shore and the wind sighing through the ancient beech trees created music in her soul.

Amelia needed soul music to offset the strict upbringing of the children of the exiled House of Orleans. She wore the short dresses that tradition assigned well reared little girls of the time and her maid braided her hair in two long double plaits that hung down her back. Amelia’s father saw to her education as relentlessly as her maid braided her hair. She loved serious reading, with her tastes leaning to history, especially French history, archaeology, poetry, and fiction. She learned Latin and worked at her German. She enjoyed drawing and painting in oils and the more strenuous activities of riding, following the hounds, fishing, and walking.

During walks in the countryside with her father, Amelia became acquainted with ordinary people and her generous spirit shared the joys and sorrows of their lives. Offering a helping hand and comforting the sorrowing seemed like second nature to her and not an acquired, self conscious virtue. This facet of her personality later served to endear her to the people of Portugal.

The oldest son of Luis I of Portugal and Maria Pia of Italy, Prince Carlos had been calling on the French ambassadress and noticed the portrait of Princess Amelia on the mantelpiece. The portrait so captivated Prince Carlos that he traveled to Paris and became acquainted with Princess Amelia. His mother, Queen Maria Pia, wanted her son to select a bride from a list of European princesses including Princess Mathilde of Saxony and Princess Victoria of Wales. For their part, Princess Amelia’s family had made several attempts to arrange a marriage for her with Austrian and Spanish princes.

A few weeks after they met, Princess Amelia and Prince Carlos became engaged and they were married on May 22, 1886, when he was 23 and she was almost 21. The bridal couple entered Lisbon with the sounds of joyous welcome ringing in their ears. Both insiders and outsiders noted that the couple loved each other, and by all accounts they lived together harmoniously. They had three two sons and a daughter. Luis Filipe, Duke of Braganza was born on March 21, 1887, and died on February 1, 1908. The Infanta Maria Anna, was born and died on December 14, 1887, and Manuel II was born on March 19, 1889, and died on July 2, 1932.

Prince Carlos became King of Portugal on October 19, 1889, and Queen Maria Amelia continued to be involved with her subjects. She learned Portuguese, and continued her painting and practiced her love of music by adding Portuguese songs to her repertoire. She had been taught to sew as a young girl, and she made many of the garments that were included in the layettes of her children. Although she sometimes found the rigid etiquette of the Portuguese court oppressive, she performed her duties with determination and charm and her liveliness captivated the court and the Portuguese population.”I shall stand my ground,” she said, according to Lugien Gorpeghot in his book, Memories of Queen Amelie of Portugal.

According to an article in the American newspaper, the Brooklyn Eagle, the Queen studied diligently for two years at the Eschola Polytechnica, the College with the highest reputation in Lisbon, and earned a degree that entitled her to practice medicine. She said that she had undertaken the medical training so that she could treat her husband because he grew stouter as he aged.

After she had treated her husband, Queen Maria Amelia turned to her family and her subjects. She nursed many of them individually and devotedly, and she became actively involved in causes like preventing and treating tuberculosis. She set up a sanatorium for tubercular children in the Palace of the Fort de Antao at the mouth of the River Sado, and another at Guarda Braganza. She founded the Rego Hospital for people in the last stages of tuberculosis and established several dispensaries.

For years, organizations like the Portuguese Republican Party and a Portuguese secret society called the Carbonaria had been attacking the monarchy in print and by stirring up discontent among the people. Although many Portuguese still loved the King and Queen, there were others who muttered against them. The situation came to a head on February 1, 1908. Returning to Lisbon from the palace of Villa Vicosa, Queen Maria Amelia, King Carlos and their two sons, Prince Luis Filipe and Prince Manuel took a boat across the Tagus River and disembarked in the Terreiro do Paco, central Lisbon’s main square.

The Royal Family climbed into a carriage to take them to the Palace of Necessidades . As the carriage crossed the square and turned into Arsenal Street, assassins in the crowd fired several shots. King Carlos died immediately and Prince Luis Filipe, mortally wounded, died later that day. Unharmed, Queen Maria Amelia defended Manuel II with a bouquet of flowers that she had held in her hand.

On February 2, 1908, Manuel II became King of Portugal, the last of the Braganza dynasty, but he had a short tenure as King. On October 5, 1910, a military coup established the Portuguese First Republic. Queen Maria Amelia and the rest of the royal family left Portugal to live in exile and she spent most of her remaining life in France.

“I shall stand my ground,” she continued to insist, and she firmly stood her ground, even as the exiled last Queen of Portugal, until her death on October 25, 1951.