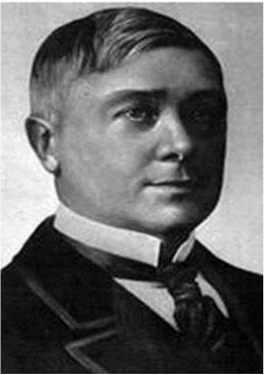 “I can do without the grass that sings, at a pinch, but I must absolutely have the blue bird.” Maurice Maeterlinck, “The Blue Bird”

By July 12, 1940, refugees fleeing war torn Europe were so familiar to United States customs officials in New York City that the drama of two more refugee lives and their possessions didn’t move them. The law was the law and even though the old man and his young and pretty wife seemed nice enough, they weren’t going to make any exceptions and allow them to keep the two caged blue birds that the woman clasped so tightly.

Leading to the Future

The old man, Maurice Maeterlinck, who would to turn 78 on August 29th, knew drama well since he listed playwright in the occupation blank on the immigration documents. He wrote poetry, plays, and essays and had won the Nobel Prize in Literature in 1911. His work centered around the themes of the meaning of life and death and his plays were important parts of the Symbolist movement. Originating in Brussels, Belgium, Symbolism was an idealistic movement that artists discontented with their culture developed by creating a refined, elegant, subtle, intellectual and elitist style of expression centered around symbols like blue birds.

His wife Renee, a beautiful red haired actress, stood next to Maurice, clutching the cage with their beloved blue birds. She had not always been the woman in his life. In 1895, Maeterlinck was still a young man, but he weathered parental disapproval and continued his involvement with married opera singer Georgette Leblanc until 1918.

In 1919, he married Renee Dahon who had acted in his plays. The Maeterlincks sailed from Lisbon, Portugal to New York on the Greek liner Nea Hellas as war refugees. They had lived in Belgium and France until the Nazis occupied both countries and forced them to flee to Portugal, and then to the United States.

“You Must Wait for History to Clarify Itself”

Maeterlinck later told a New York Times reporter that “I knew that if I was captured by the Germans I would be shot at once, since I have always been counted as an enemy of Germany because of my play, “Le Bourgmestre de Stillemonde,” which dealt with the conditions in Belgium during the German Occupation of 1918.”

He told the customs officials that he was virtually penniless because the Nazis had appropriated all of his funds from his Brussels bank. He had nothing left except for the two blue birds and the small royalties on his play, “The Blue Bird.” “The Blue Bird” is the story of a girl named Mytyl and her brother Tylyl who seek happiness with the help of a good fairy Berylune. The symbol of the play is The Blue Bird of Happiness.

“The Blue Bird” premiered on September 30, 1908, at Constantin Stanislavski’s Moscow Art Theater and later was made into several films and a TV series. French composer Albert Wolff wrote an opera based on the original play which was performed at the New York Metropolitan Opera in 1919.

The playwright and poet of brightness and joy, the blue bird of happiness, spoke darkly about the war tragedy that had overwhelmed Europe. “What has happened is catastrophic…You must wait for history to clarify itself.”

A quarter of a century later, Maeterlinck once again turned to the United States. This time the customs officials formed a brick wall. If the customs officials had been less entwined in the law they would have gone beyond their words of welcome to Maurice Maeterlinck and his wife. They would have included the two blue birds in their greetings. They didn’t include the two blue birds because a United States law existed that said blue birds were not allowed to be brought into the country. Since such a law stood on the books, the customs men would not let the blue birds into the country.

“I Must Absolutely Have the Blue Bird”

Maurice handed the blue birds to the captain of the Nea Hellas and he and Renee walked past the customs agents to their new lives in Manhattan without the blue birds. The Symbolism of the Blue Bird The American lives of the Maeterlinck’s lasted for seven years. They returned to France in 1947, and settled in Nice. Maurice died in 1949, leaving an impressive body of literary work.

Maurice Maeterlinck, Mystic and Dramatist: A Reminiscent Biography of the Man and His Ideas, Patrick Mahony, 1964.