Historical Time and Tides Ebb and Flow in Ostend, Belgium 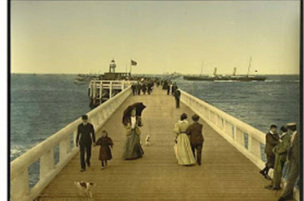 The illimitable, silent, never-resting thing called Time, rolling, rushing on, swift, silent, like an all-embracing ocean tide, on which we and all the universe swim like exhalations, like apparitions which are, and then are not…” Thomas Carlyle

Time and tide....The North Sea tide has ebbed and flowed in Ostend, Belgium, for centuries, but each year it brings in new  historical happenings and human polar bears. One of the tides of time journeys from August  1900 when Ostend was the most fashionable bathing resorts on the continent of Europe and Luigi managed the Royale Palace Hotel. Another tide from the same month carries echoes from the visit of the Shah of Persia and the attitude war between the English and Belgians because a Flemish Court had acquitted Jean-Baptiste Victor Sipido who attempted to assassinate the Prince of Wales in Brussels. More recent tides welcome more than  6,000 swimmers in Ostend every January, when they undertake their annual polar bear plunge into the timeless, chilly North Sea waters.

In an August 10, 1900, story S. Sieverts Drewett, Travel Editor of the  Brooklyn Eagle, called Ostend the most fashionable bathing station in all Europe. He noted that the English were not as visible at Ostend as in the past, but Americans were better represented. According to Editor Drewett, Americans liked Ostend better and visited it more often than any other coast resorts in Europe because it had a magnificent casino, a fine band, and a superb sand beach. He said that beach visitors at Ostend dress the best and the Ostend hotels were the finest and most attractive of any European shore.
Editor Drewett especially sang the praises of the Royal Palace Hotel which opened in 1899, and then closed for more remodeling.

He reported that it had reopened in 1900 under the direction of Luigi, the popular and long time directing manager of Shepheard’s Hotel at Cairo, Egypt. He described Luigi as a “most charming man, Austrian by birth, and perhaps the most capable of all hotel directors in Europe.”

He also managed the “Ostend Extension," which Maria Kerke was called,  which ran from the King of the Belgian’s summer residence on the Digue or dike a few miles southwestward. The Royal Palace Hotel occupied the largest space as a building of any hotel in Europe. Walled in by a colonnade, it featured twelve full sized tennis courts, and walks in the gardens for cycling and strolling. No private villas or cottages lined the long Digue from one end to the other. In fact, the only cottage on the Digue belonged to the King of Belgium. It was a very modest building that could be mistaken for the home of a retired tradesman of moderate means and if the sentries weren’t visible, no one would suspect it was the summer home of a European ruler.

The Shah of Persia Visits Ostend

During the week of August 15, 1900, Luigi, proprietor of the Ostend Royale Palace Hotel, prepared for an important visitor. Mozaffar ad-Din Shah Qajar, The Shah of Persia-modern day Iran- planned to visit Ostend and he and his company of sixty people would occupy an entire floor of the hotel, complete with a special entrance.

The Shah had decided to visit Ostend instead of England because of the mourning in England and the diplomatic unrest between England and Belgium. Alfred, Duke of Saxe-Coburg and Gotha, the second son and fourth child of Queen Victoria and Prince Albert of Saxe-Coburg and Gotha had died on July 30, 1900 and the entire English court mourned him. The continued South African War had bereaved hundreds of upper class English families. The English foreign policy toward Persia had not been very successful and the Shah chose to avoid England on his visit and seek a neutral country like Belgium for the rest of his European stay.

The Royal Palace Hotel was so large that the Shah and his party of 60 could move about freely in their suite without encountering crowds of visitors in other parts of the hotel. If he did decide to socialize, there were many well known Americans visiting the Royal Palace Hotel. Mr. and  Mrs. Thomas F. Walsh were among the current American guests and they had decided to remain over the Shah’s visit.

Thomas Walsh had climbed from being a poor Irish immigrant in America to a mining multi-millionaire and had taken his Wisconsin born wife, Carrie Reed Wash with him. President William McKinley appointed him as a Commission from the state of Colorado to the Paris Exposition of 1900 which lasted from April 15, to November 12, 1900. Thomas Walsh turned a Seine River steamer into a floating palace and gave a $40,000 dinner to a group of distinguished men. He chartered a train of five palace cars and fitted it with silk and decorations which he used on his steamer and  toured France and Belgium.

King Leopold of Belgium met Thomas Walsh at Ostend and Thomas Walsh gave a dinner at the Hotel Ritz in honor of King Leopold. The Czar’s band and opera singers from Paris provided the music for the dinner. King Leopold developed extensive mining interests in Africa and it was through Mr. Walsh that experts were sent to investigate these properties and report on their value. In a sense, Leopold the King of Belgium became a partner of Thomas Walsh the multi-millionaire miner.

The Atlantic Wall in Ostend

After he was assigned to improve the Atlantic Wall’s defenses early in 1944, Field  Marshal Erwin Rommel immediately began strengthening them because he believed they were entirely inadequate. His goal was to destroy Allied landing craft before they could unload for any kind of invasion of the European continent. He directed slave laborers to build a string of reinforced concrete pillboxes to be built along the beaches or slightly inland to protect machine guns, antitank guns, and light artillery. They  placed mines and antitank obstacles on the beaches themselves, and they mined the waters just offshore.

In Ostend, the Germans installed emplacements of the "Saltzwedel neu battery" and the "Stutzpunkt Bensberg," consisting of several men's quarters and other facilities. A unit of Germany military engineers called  Pionierstab- who were in charge of bunker construction used them. The  Ostend part of the Atlantic Wall is well preserved and available for public visits.

In January of every year,  the timeless tides touch thousands of human polar bears on the beach opposite Drie Gapers in Ostend when they splash into the North Sea. There were more than 6,000 people plunging into the chilly water in 2011 and 2012 and more expected in the future.