Jean Baptiste Sipido Tries to Assassinate the Prince of Wales 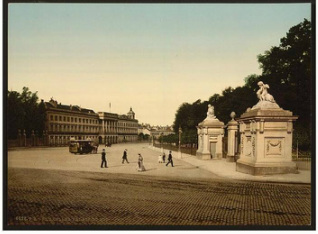 On April 4, 1900, as Edward Prince of Wales was traveling through Belgium on his way to Denmark a fifteen year old Belgian tinsmith’s apprentice, Jean Baptiste Sipido attempted to assassinate him at the Brussel-Nord railway station in Brussels, Belgium.

Jean Baptiste Sipido accused the Prince of being responsible for the slaughtering of hundreds of people during the Boer War In South Africa, and he leaped onto the foot board of the royal compartment before the train left the station. He fired two shots through the window, but missed everyone inside. Policemen quickly wrestled Sipido to the ground and arrested him.

On April 5, 1900, the Belgian Police arrested and interrogated an accomplice of Sipido in Brussels. Sipido himself seemed inclined to confess and according to his statements, his actions were the outcome of a plot. The police knew the names of three of his associates and the person arrested confessed that he had sold the gun to Sipido.  He didn’t express any remorse for his actions.

According to the Etiole Belge, Sipido explained his motives as follows: “For a long time I have thought that the ambitious men who are unchaining the war sacrifice of so many human lives that they deserve to be punished. These men should suffer the reality of realization. When I learned   by the papers that the Prince was going to pass through Brussels I immediately received to become the avenger of humanity and to kill this assassin. On Sunday I went to the old market and bought a second hand revolver and cartridges. I had then made up my mind to carry out my project. I regret that I have not accomplished it as I desired.”

Later in the afternoon the examining magistrate decided to confront Sipido with his father and a touching scene ensued.  Sipido paid no attention to his father’s appeals, maintaining his previous declarations. Sipido’s parents were deeply moved when told of the act of their son. His mother exclaimed, “What a disgrace for us who have always worked hard and have sacrificed so much to bring up our children. It is impossible! Someone must have assumed his name. He never had a revolver in his hand and had no money to buy one.”

The father said, “It is impossible. I gave him 2 f on Sunday for a week’s work because he had worked well. If he has done this he deserves to be guillotined. I wish to see all my children dead if they are to do such things.”

Dr. Leyds, Diplomatic agent of the Transvaal, telegraphed to the Prince of Wales on his escape from assassination. The members of the Transvaal Legation here called at the British Legation and subscribed their names in the visitor’s book after hearing of the attempt on the Prince’s life.

The papers continued to express indignation at the outrage. The Journal de Bruxelles said,

“The Prince of Wales is a friend of Belgium and a relative of our king. He is a universal favorite He enjoys the sympathies of the Anglo Saxon race and his person like the Queen of England, is sacred. In those circumstances one can understand that just indignation occasioned in England is a feeling that is shared by all honest people.

In the Chamber of Representatives today, the President, Baron Snoy, said he felt sure that he was but voicing the feeling of the whole Belgian nation in expressing on behalf of the chamber, the indignation created in all minds by the attempt made on the life of the Prince of Wales.”The youth of the criminal,” he continued, “leads me to hope that it was only the act of a person unconscious of the enormity of his offense but we feel bound to express to England and the Prince of Wales our most sincere regrets.”

The Minister of Foreign Affairs, M. de Favereau, expressed regrets on behalf of the government. He said, “The government yesterday forwarded to the Prince of Wales and Queen Victoria an expression of the indignation to which such an odious act has given rise.”

The Socialist leaders announced their unanimous approval of the words of sympathy to Queen Victoria and the Prince of Wales, adding however, that if Socialists condemned individual crimes they blamed with no less energy “the great collective crimes being committed at present in South Africa.”

“Blood calls for blood,” said Mr. Van der Velde, the leader of the Socialists. But his remarks called forth protests from the Rightists who called forth the fact that Great Britain had always been the best guarantee of Belgium’s neutrality.

Mr. Lorand, Leftist, while admitting Great Britain’s services to Belgium, said he could not, “nevertheless forget that she has betrayed her traditions in attacking a free people.”

Despite his obvious guilt, the jury acquitted Sipido because of his youth. It ruled that “by reason of his age he had not acted with discernment” and could not be held legally responsible for his actions. The court didn’t even place Sipido in a reformatory and immediately after his trial, Sipido immediately crossed the border to France.

The results of the trial pitted Britons and Belgians against each other. The Leader of the British House of Commons called the verdict a “grave and most unfortunate miscarriage of justice.”

A Flemish town called Ninove reacted to the verdict of the English court by issuing a proclamation of its own.  The town issued a proclamation warning English people not to enter its borders. The Ninove people strongly sympathized with ultra republican principles and evidentally wanted to see every crowned head in Europe dethroned. They appeared to be particularly worry that Sipido didn’t succeed in mortally wounding the Prince of Wales.

The Ninove proclamation included this statement:

“The verdict of the Assize Court of Brabant was awaited with impatience at Ninove. As soon as it was known that Sipido was acquitted, a great cry of joy arose from every heart and our streets resounded with shouts of “Vive Sipido! Vive les Boers!  A bas les Anglais!”

Ending his working life as technical and commercial director of the General Society of Belgian Socialist Cooperatives, Jean Baptiste Sipido later retired to Cagnes in the Department of Alpes-Maritimes in France.