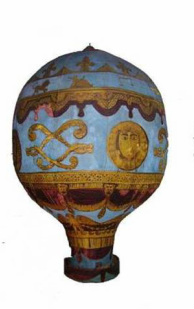 Madame Elisabeth Thible of Lyons, France, had a brave spirit and a voice that soared in high enough registers for her to be an opera singer. On June 4. 1784, the opera singer and the wife of a worker in wax and her partner Monsieur Fleurant literally soared into the heavens in a free floating hot air balloon. . On May 20, 1784,  the Marchioness and Countess of Montalembert, the Countess of Podenas and a Miss de Lagarde had taken a trip on a tethered balloon in Paris, but Elisabeth Thible was the first woman in the world to free float in a hot air balloon.

On June 4, 1784, Elisabeth Thible, wearing a lace trimmed dress and a feathered hat and her pilot Monsieur Fleurant ascended in a Montgolfiere hot air balloon with a burning chafing dish hanging beneath it. The balloon was christened La Gustave to honor King Gustav III who was visiting Lyon. Both King Gustav III and the royal family of France including King Louis XVI and Marie Antoinette observed La Gustave’s voyage.

Sometimes Elisabeth Thible’s achievement is overshadowed by the fame of Citoyenne Henri, who often is credited with being the first female aeronaut, although she went up fourteen years after Elisabeth Thible.  Citoyenne Henri, often called Citizen Henry in English, accompanied Andre Jacques Garnerin on a balloon trip on July 8, 1798 from the Parc Monceau in Paris.

Originally, Monsieur Fleurant had prepared to travel with Count Jean Baptiste de Laurencin who had been one of the six passengers on the flight of the large, experimental Montgolfier balloon called the Flesselles on January 19, 1784.  Joseph Montgolfier piloted the twelve minute flight that ended dramatically when the balloon began to tear and burn. All six passengers and the pilot escaped unhurt. Some people, possibly including Monsieur Fleurant, speculated that Count de Laurencin didn’t want to attempt another balloon flight so quickly and that is why he gave Elisabeth Thible his spot on the La Gustave.

Out of her spirit of courage and adventure , Elisabeth Thible offered to ascend on La Gustave with  Monsieur Fleurant and to share the fate of the voyage. He gratefully accepted.

Elisabeth Thible and Monsieur Fleurant Sing Opera in the Air

As soon as La Gustave left the ground Monsieur Fleurant and Elisabeth Thible who was dressed as the Roman goddess Minerva sang two duets from Monsigny’s La Belle Arsene, a famous opera of the time. A crowd witnessed the lift off of La Gustave, and many of them helped with the ascent of the balloon.

The balloon flight lasted 45 minutes, with La Gustave travelling about three miles and reaching a height of 8,500 feet. La Gustave’s landing turned out to be typically bumpy and when its basket hit the ground, Elisabeth Thible turned her ankle. According to a newspaper account of the adventure, Monsier Fleurant credited Elisabeth with the successful flight. He commended her both for feeding the balloon’s fire box and for her extraordinary courage.

Often in hot air balloon historical discussions Elisabeth Thible’s name is overshadowed by the names of Joseph Michel Montgolfier and Jacques Etienne Montgolfier who created La Gustave, the balloon that she and Monsieur Fleurant rode in to the heavens. Only seven months before Elisabeth Thible’s voyage as the first woman to voyage in a free floating hot air balloon, Pilatre de Rozier and the Marquis D’Arlandes had established a record for the first manned free flight in a Montgolfier balloon on November 21, 1783.

Joseph Michel Montgolfier and Jacques Etienne Montgolfier invented the Montgolfier style hot air balloon and launched the first hot air balloon carrying Etienne. According to a story in Popular Science Monthly, Joseph Montgolfier got the idea for a hot air balloon when he and his wife were airing her dresses in front of the fire in preparation for going to a ball.  He noticed how the hot air currents swirled the material in the dresses and made them float. Why, he wondered, couldn’t material be used to float a basket into the sky using a fire source?

Joseph and Jacques Montgolfier were two of the sixteen children born into a family of paper manufacturers in Annonay, in Ardeche, France. Joseph, was a dreamer and impractical in terms of business and personal affairs. Etienne had a more even and businesslike disposition. On September 19, 1783, the Montgolfier brothers flew their experimental balloon in front of a crowd at the royal palace in Versailles. The crowd included King Louis XVI of France and Queen Marie Antoinette. The balloon had a basket attached to it and it carried the first living beings sent up in a balloon.. The basket carried a sheep which was believed to resemble human anatomy, a duck to test the effects of high altitude, and a rooster to further test altitude.

. Etienne was the first human to lift off  the earth in a balloon on October 15, 1783, making a tethered flight from the yard of the Reveillon workshop in the Faubourg Saint-Antoine. On the same day Pilatre de Rozier became the second human to ascend into the air, reaching an altitude of 80 feet, the length of the tether.

On November 21, 1783, Pilatre de Rozier and an army officer, the Marquis d’Arlandes made the first free flight by humans. They started from the grounds of the Chateau de la Muette on the western outskirts of Paris and flew about 3,000 feet above Paris for a distance of about six miles. After about 25 minutes, the machine landed between the windmills outside of the city walls.  The balloon Le Flesselles, ascended over Lyon, France, on January 1, 1784, carrying seven people. Joseph Montgolfier piloted the twelve minute flight that ended dramatically when the balloon began to tear and burn. All six passengers and the pilot escaped unhurt.

Five months later, Madame Elisabeth Thible and her partner Monsieur Fleurant became the first women to ascend into the heavens in a balloon and sing an aria while she floated above the earth.

Gillispie, Chares. The Montgolfier Brothers and the Invention of Aviation. Princeton Universtiy Press, 1983